"Dr. Audrey Smedley (1930-2020) was a pioneering anthropologist whose work on the history of the concept of “race” earned multiple awards and helped shape the treatment of race in academic institutions, such as the American Anthropological Association." Read more on the Virginia Commonwealth University website

Zora Neale Hurston (1891-1960) was an American author, anthropologist and film maker.  "Hurston became the most successful and most significant black woman writer of the first half of the 20th century. Over a career that spanned more than 30 years, she published four novels, two books of folklore, an autobiography, numerous short stories, and several essays, articles and plays. Her most popular novel was Their Eyes Were Watching God (1937)."  While at Columbia University, she was a student of Franz Boas.  Read more on the official Zora Neale Hurston website

"William Edward Burghardt Du Bois (1868-1963) was an American civil rights activist, leader, Pan-Africanist, sociologist, educator, historian, writer, editor, poet, and scholar...In 1909, Du Bois was among the founders of the National Association for the Advancement of Colored People (NAACP) and from 1910 to 1934 served it as director of publicity and research, a member of the board of directors, and founder and editor of The Crisis, its monthly magazine." Read more on the NAACP website

“Dr. Leith Mullings (1945-2020), Distinguished Professor of Anthropology at the Graduate Center, CUNY, began her research in Africa with the study of religion, plural medical and the construction of personhood in postcolonial Ghana (Therapy, Ideology and Social Change: Mental Healing in Urban Ghana, [University of California Press, 1984]) Her work has centered on inequality, its consequences and resistance to it in the U.S. and other regions of the world.” Read more on the official Dr. Leith Mullings website

Dr. Michel-Rolph Trouillot (1949-2012), the author of Silencing the Past: Power and the Production of History, was a Haitian anthropologist and historian.  He was awarded the 2011 Frantz Fanon Lifetime Achievement Award for his contributions to both fields.  Read more about Dr. Truillot on the NACLA website and see his Bibliography on Living Anthropologically

"George McJunkin was a former slave from Texas who became a bronco busting cowboy, as well as a bi-lingual ranch foreman...His intellect and drive to learn led him to make an incredible discovery that changed the world of North American archeology forever."  Read more on the National Parks Service Capulin Volcano National Monument website

Student Activism, the NAACP, and the Albuquerque City Anti-Discrimination Ordinance, 1947-1952

"On 12 September 1947, George Long, an African American student at the University of New Mexico, was refused service at Oklahoma Joe’s café in Albuquerque and sparked a boycott of local businesses that did not serve racial minorities. The boycott began a five-year campaign that resulted in 1952 in the passage of the Albuquerque City Anti-Discrimination Ordinance, which outlawed racial discrimination in the city. The victory was secured through a combination of student activism, National Association for the Advancement of Colored People (NAACP) branch involvement, and broad community participation, including the cooperation of white civic leaders and Hispanics....The New Mexico state legislature, with a realistic and practical template to follow, passed an antidiscrimination law similar to the Albuquerque ordinance in 1955 to cover the entire state." Read more about this historic achievement

The University of New Mexico Africana Studies: Why we Celebrate Black History Month

The University of Michigan 2021 Lecture Series: From the “New Archaeology” to Equitable Archaeologies: Global Lessons from Black Scholars

Visit the National Museum of African American History and Culture

UNM Cultural Collaboration: Black History Celebration Will Be a Model for Year-Round Activities

Jada Benn Torres (UNM PhD, 2006) Associate Professor Anthropology at Vanderbilt University, will present her research in genetic anthropology on April 16, 2021 at 10am MST. Join us on Zoom to see the talk on 3/26/21, or visit our You Tube  page to see a recording.

Read her new book: Genetic Ancestry: Our Stories, Our Pasts

Featured Lecture: Human Skin Color is the Product of Evolution and is Important to Talk About. Dr. Nina G. Jablonski

Nina Jablonski is the Evan Pugh Professor of Anthropology at the Penn State University. Her work on the evolution of skin pigmentation has been highly influential in the field of Anthropology, and she has received international recognition for her contributions to the fight against racism. 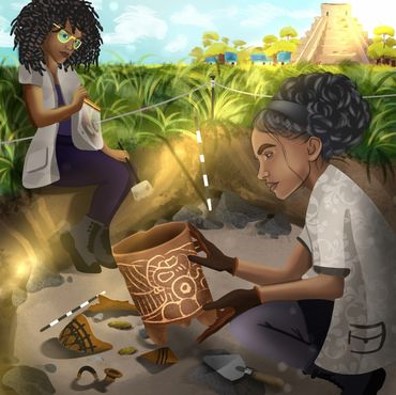