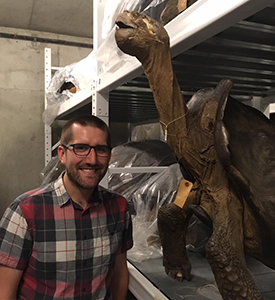 Cyler Conrad, an adjunct assistant professor of Archaeology at The University of New Mexico, recently co-authored a chapter in a book called Galapagos Giant Tortoises. In this magnum opus, contributors from around the world examine the tortoise’s island home, English naturalist Charles Darwin’s visit to the island to observe the enormous reptile, conservation, and its future.

Conrad’s chapter, co-authored with James Gibbs from State University of New York and the Galapagos Conservancy, is called The era of exploitation: 1535-1959 and explores the tragic hunt of the creatures to near-extinction by mariners, colonists, and collectors. A combination of overhunting of whales, the discovery of oil in Pennsylvania, the American Civil War, and the completion of the transcontinental railroad across the United States prevented the final extinction of the behemoth.

“I contributed a chapter with James Gibbs on the history of Galapagos tortoise exploitation from 1535  ̶ the discovery of the archipelago  ̶  to 1959, the creation of the Galapagos National Park. We completed a quantitative analysis of whaling logbook records dating to the 1800s, and summarized historical documents throughout this entire period to reconstruct when, how, and in what quantity humans exploited Galapagos tortoises,” Conrad said.

“Unfortunately, it was quite easy to understand why humans did this. Galapagos tortoises are large, slow, easily stackable and apparently tasty. Perfect food for hungry and scurvy ridden pirates, whalers, and Gold Rush passengers, among others. One of the largest takes occurred in December 1831 when whalers collected 585 from Española Island. We also documented the settlement-era exploitation of tortoises for oil once humans began to live on the archipelago. Our work highlighted that while thousands of Galapagos tortoises were killed to feed maritime crews and passengers, well over a thousand tortoises were also killed in the name of science. These tortoises ended up in museums, institutions, or zoos, where they eventually died far from their home.”  Read the full article