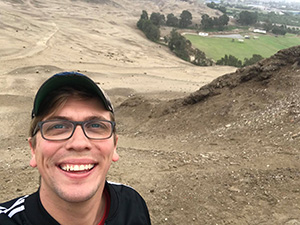 James Davenport, Archaeology graduate student, has been awarded a Wenner-Gren Dissertation Fieldwork Grant for his project "Hand of the Potter, Hand of the State: Commnication and Imperial Control in Tawantinsuyu," which examines the production of Inka imperial pottery at the oracle center of Pachacamac on the central coast of Peru.  James has also received a Graduate Research Supplement award from the UNM Office of Graduate Studies to support his research.

The Inka Empire used standardized material culture in distinct, recognizable styles that was distributed broadly to communicate ideas about power and control to its subjects. This included Inka polychrome pottery, which was standardized in form and decoration. Though this pottery was uniform in its outward appearance, it was made by a diversity of producers, both in the capital heartland of Cuzco and in the provinces by conscripted subject potters. This research examines the organization of production for Inka polychrome pottery at the provincial site of Pachacamac, an important oracle and pilgrimage center on Peru’s central coast. Pachacamac was subjugated by the Inka in the Late Horizon (CE 1470 – 1532) which brought significant changes to its landscape and architecture. Pachacamac was also the location of important state-sponsored ceremonies and activities which utilized Inka polychrome vessels. Potters learn techniques for production by participating in a community of practice, and boundaries between different communities can be elucidated through investigating the technological styles of their products. Using macroscopic, microscopic, and compositional analyses, this research will investigate the communities of practice that produced this Inka polychrome pottery and investigate how the imperial political economy functioned to provision the state-sponsored activities that occurred at Pachacamac.