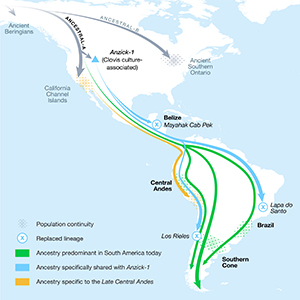 Dr. Keith Prufer and the UNM Center for Stable Isotopes are part of large international collaboration linking Early Holocene human DNA in Belize to earliest populations in North and South America. The article, Reconstructing the Deep Population History of Central and South America, was published November 8th 2018 in the journal Cell.

The first high quality ancient DNA data from Central and South America—49 individuals some as old as 11,000 years—has revealed a major and previously unknown exchanges between populations. Unprecedented details about the ancestry of the people of Central and South America have been uncovered in a new study in the journal Cell by archaeologists and geneticists at The University of New Mexico, Harvard Medical School, the Howard Hughes Medical Institute, the Max Planck Institute for the Science of Human History, the University of California Santa Cruz, the Pennsylvania State University, the University of São Paulo, and other institutions in Brazil, Belize, Chile, Argentina, Peru, the European Union and the U.S.

University of New Mexico Anthropology Professor Keith Prufer and his colleagues from Pennsylvania State and Exeter University (UK) contributed the Central American component of this unprecedented study as part of an NSF and Alphawood Foundation funded project studying the earliest humans to settle in the American tropics. Prufer led excavations in Belize where the they recovered three of the oldest skeletons from the region, all with well-preserved DNA. This UNM project focuses on early human adaptations in remote tropical rainforests in the Americas. The data from these excavations are reshaping how researchers view Early Holocene relationships between humans living in North, Central, and South America.

According to Prufer, there are many remarkable aspects to this research finding. “For the first time, we have archaeological and genetic evidence linking some of the oldest humans in Central America to the earliest known populations to arrive in the New World, and clear indications of an early relationship between this region and South America,” says Prufer. “It is also a testament to the power of interdisciplinary research involving archaeologists and geneticists  and how it is revolutionizing the study of ancient humans.” Read more here